This is why we can't have nice things.

We got to know some folks in our neighborhood.  A lot of them, in fact.  On Monday, we went to a meat-burn at one's house, and had a great time.  The hosts are thinking of making it a monthly thing.

Found out one such neighbor runs a weekend D&D game for other old married types.  I've got an invite to join them, if I have the time.

It turns out C-Monster's best friend at school only lives one street over from us (hardly a sure thing with a private school).  Two playdates have been successfully executed.

I'm reminded that I work with some awesome, committed people, who will put our client's well-being far ahead of their personal comforts.

After spending two days raking and bundling and spending it on my hands and knees, getting the front yard cleared, with the prospect of spending another day doing the same in the back, imagine my wonder when our $28/week yard service showed up and not only did their usual mowing and edging routine, but also gathered up all the branches and shingles in the backyard into a single pile.

I got a lot of reading done: finished up all the softcover Dresden Files, read Elroy's The Black Dahlia (powerful, but having read his later work, I felt like I could see the wires, so to speak; still, the last 100 pages are INTENSE).

Later, I'll get the pictures off the camera and put them online so y'all can see the damage.

These were taken shortly before noon last Saturday.  The rain was still falling and there were still occasional gusts, but it was clear we were finally out of the woods.

The front yard, looking east towards the soccer field and the park: 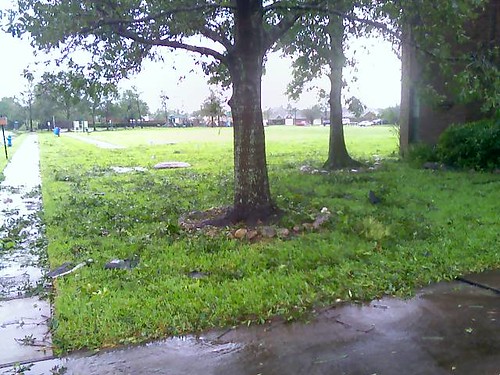 The front yard, from the middle of the street.  As you can see, no flooding, but lots of branches and shingles.  The ones in the front yard were from our neighbors across the street, I suspect. 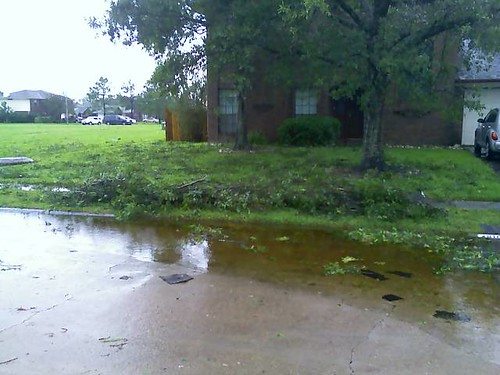 Our upstairs bedroom roof, over the stairwell and master bedroom.  This is the source of the various leaks. 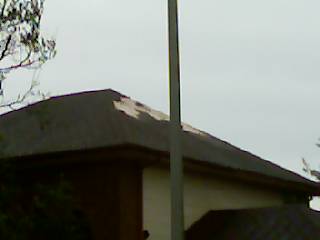 The back of the house, showing the destruction of the privacy fence.  Also, you can see a little bit of shingle damage over the master bath that didn't spring any leaks. 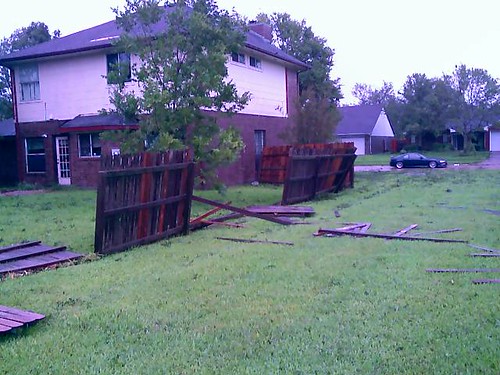